PeterCrane79
1 yr. ago
Here's a biblical conspiracy theory to consider:
Solomon's Temple was used as the first (out of hundreds) Masonic Lodge, which was managed by Canaanites (i.e., rat-faced merchants, the devil's children). After Jeroboam and his family got killed (to keep Masonic Lodge secrets hidden), Ahijah replaced him and acted as Solomon's secretary and the main temple treasurer. He pretended to be a ''Levite'', but was secretly a Druid of the most Satanic kind, involving torture, rape, and sacrifice (both animal and human), all of which included women and children.
Read more

PeterCrane79
1 yr. ago
"Stonemasons from Gebal (Byblos) cut stones for the Temple. Rituals in Freemasonry refer to King Solomon and the building of his Temple." - Source: https://en.wikipedia.org/w...

"The 'Phoenician' [i.e. coastal Canaanite merchant] city, known to the Greeks as 'biblos' [meaning 'book/scroll'] was important for their import of papyrus from Egypt. The English word 'Bible', ultimately deriving from the Greek words 'Biblos' and 'Biblion', may have originated with the Greeks' mispronunciation of the city or its Egyptian export." - Source: https://en.wikipedia.org/w...
Read more

PeterCrane79
1 yr. ago
"The name 'Mongol' appears to be directly derived from the name Magog. For example, in India Mongol became Moghul and a large part of China was known as Mangi when Europeans first visited it. The Arabs called the Scythian tribes of Tartary Ya'jūj and Ma'jūj (Arabic: يأجوج و مأجوج‎) which means 'Gog and Magog' and the Great Wall of China as 'the wall of Magog' (Arabic: حائط الماجوج, Haa'it al-Ma'jūj). In the 13th century AD, Marco Polo, the Venetian traveler to the Orient, knew that the Mongols were descendants of Magog. He further understood the names of 'Ung and Mungu' in China to be 'Gog and Magog.' The descendants of Magog migrated via southern Russia to their current homeland, leaving behind such place-names as: Moğolistan, the Mugodzhar Hills, and the Mogoltau Mountains. Among the people of Mongolia, Inner Mongolia, central and much of northern and southern China, Korea, and Japan are descended from Magog. China also includes some descendants of Gomer and Javan. There are just over a billion people in China today. It is no wonder that the name of their ancestor, Japheth, means 'expansion', implying a large or expanding race of people. Other peoples descended from Magog include the Aleuts and Inuits (whose facial physiognomy is very similar to the Chinese), and the Samoyeds (Nentsi) who, although having adopted a Finnic language, are Mongoloid by race. Many American Indians also descend from Magog. We also find the Maghs, the town of Magok, Mogadok Mountain, the Mogaung river in Myanmar (Burma) and a tribe known as the Magars in Nepal." Source: https://creationwiki.org/M...
Read more

PeterCrane79
1 yr. ago
On the paternal side, Yahshua was genetically produced (involving 11 autosomes and a Y chromosome) straight from Yahweh, without involving any sexual intercourse (thereby surpassing Jehoiakim's curse). Because Yahshua was the (2nd and final) Adam, he had the right to the highest kingship and (Melchizedek) priesthood. Yahshua's genetics on the maternal side (11 autosomes, ~48% of the 23 chromosomes) came from Mary Magdalene's bloodline. Through paternal lineages, Joseph and Mary Magdalene were both from David's bloodline (Judah's tribe). Legally, Yahshua was a Judahite just like his father. Through the maternal lineage, Mary Magdalene was genetically tied with Aaron (from Levi's bloodline). Yahshua's genetics was: ~48% 1st Adam (at least 25% Judahite, and up to 23% Levite) and ~52% 2nd Adam.
Read more 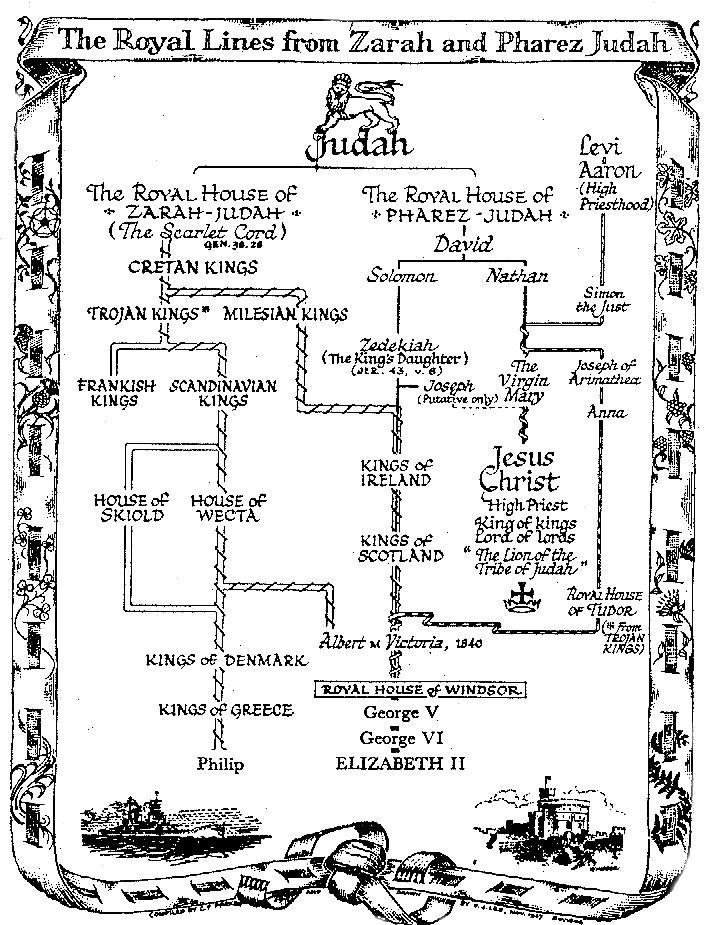 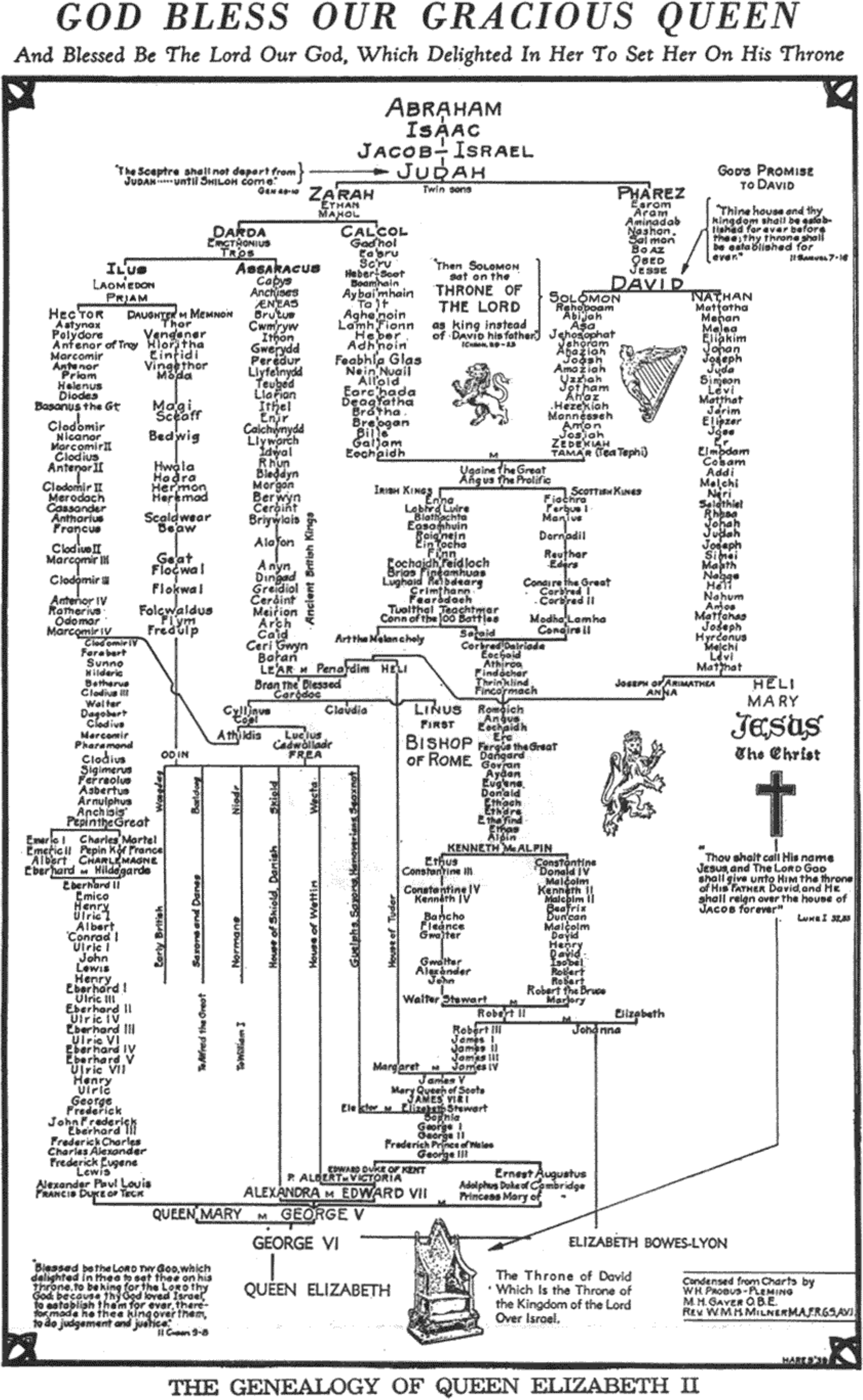 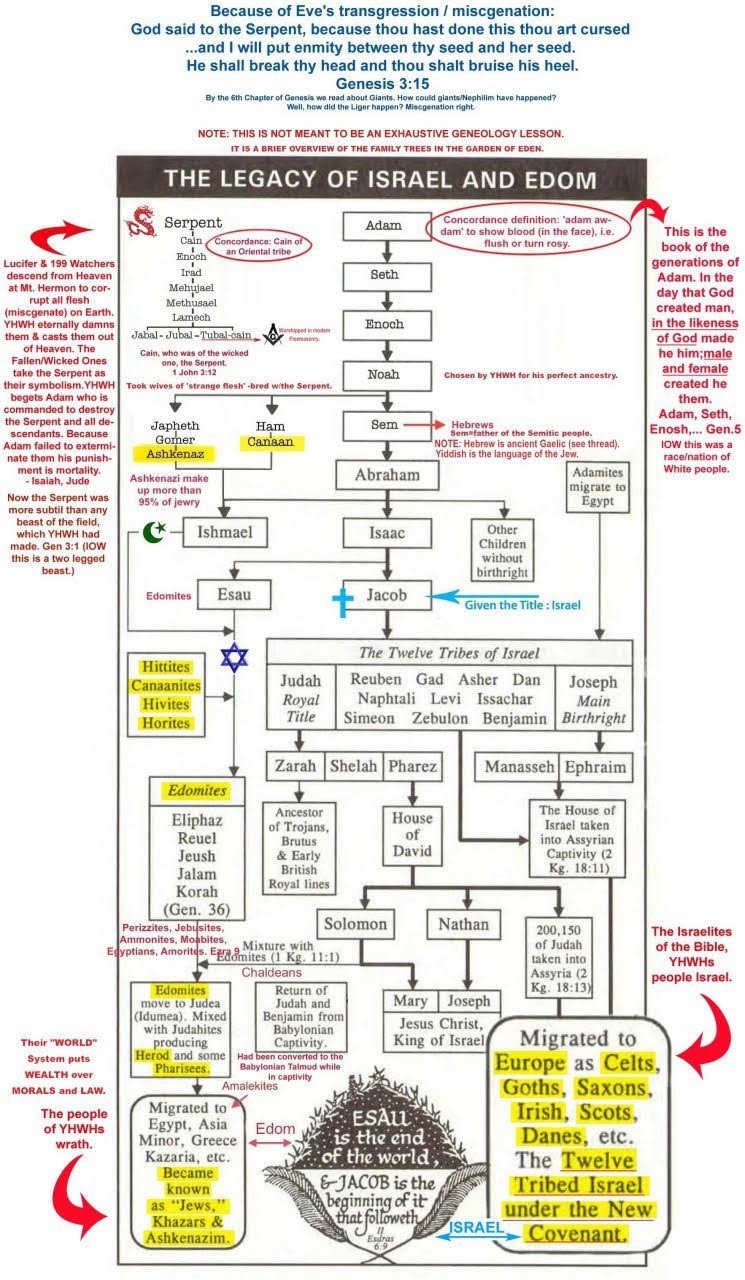 PeterCrane79
2 yr. ago
"100 Proofs The Israelites Were White"
(click the link to be directed to the playlist)
https://www.youtube.com/wa...
Read more

Where did the European peoples of today come from? Are we the Lost Tribes? Are we the people of the Bible?For more info:www.truthvids.netKey names:- Cymri / ...

PeterCrane79
2 yr. ago
There's 3 distinct racial types currently living in the physical world. Search Google images for "3 skull types" and you'll see skulls of "caucasoids" (white race), "negroids" (black race), and "mongoloids" (yellow race). Original blacks were two-legged "beasts of the fields" (like in the bible). They share DNA with apes / monkeys (search Youtube for: bullies call him/them monkeys). The original mongoloids were remnants of fallen angels (from the serpent seed). They act like they're benign when they're devilish parasites. We're expected to believe (((they))) are "Judah-ites" when they're actually hybridized mongoloids (with Esau or Japheth). The people who are often labelled as "indigenous" (or "aboriginal", "native", or the like) also have mongoloid origins. Historically, caucasoids (who are Adamites, created in God's image) built and maintained great societies, until (((they))) ruined everything with "diversity" (involving unfiltered immigration, affirmative action, and race-mixing), in addition to usury, Babylonian bureaucracy, degenerate entertainment, and schools of communist indoctrination. We're forced to believe their fake history (whites = bad/evil; non-whites = oppressed innocence), and worship their fraudulent so-called "experts" (of astronomy, algebra, physics, medicine, and whatever), without any question; otherwise, we're crazy evil stupid "anti-S(h)em-itic" conspiracy theorists, when it's the white Europeans who are the true Shemites. Yahweh (YHWH) is the holy spirit, our father, the creator of this "physical world" (our spiritual training ground). YHWH made himself physically born (as "Yahusha" or "Jesus", or whatever you prefer) through the purest part of the Adamic bloodline. In the physical world, he's been the "Son of Man/Adam", and the "King of Kings" (genetically from Judah, the king/lion tribe, through King David's branch), and the "Ultimate High Priest" (genetically from Levi, the priest tribe, through Mary Magdalene).
Read more

PeterCrane79
2 yr. ago
"I know the blasphemy of them which say (((they))) are Jews [Judah's bloodline], & are not, but are the synagogue of Satan." (Rev 2:9) "Jesus saith unto them, If ye were Abraham's children [genetically from Jacob/Israel tribes], ye would do the works of Abraham. Ye are of your father the devil [Canaanite hybrids, through Esau at best], & the lusts of your father ye will do. He was a murderer from the beginning, & abode not in the truth, because there is no truth in him. When he speaketh a lie, he speaketh of his own: for he is a liar, & the father of it." (John 8:39 & 8:44) "Jacob have I loved, but Esau have I hated." (Rom 9:13) "Esau [who is Edom according to Genesis 36] was forty years old when he took to wife Judith the daughter of Beeri the Hittite [Canaan bloodline; fallen angel hybrids through Ham], & Bashemath the daughter of Elon the Hittite: Which were a grief of mind unto Isaac & to Rebekah." (Gen 26:34-35; cross-referenced with Genesis 36:2) "The Hittites, & the Amorites, & the Perizzites, & the Hivites, & the Jebusites, were not of Israel [not Jacob's bloodline]." (2 Chr 8:7) "Thou shalt utterly destroy them; namely, the Hittites, & the Amorites, the Canaanites, & the Perizzites, the Hivites, & the Jebusites; as the LORD [YHWH / Yahweh; not Lord / Adonai / Ba'al) thy God hath commanded thee: That they teach you not to do after all their abominations, which they have done unto their gods; so should ye sin against the LORD your God." (Deu 20:17-18) "The people of Israel, & the priests, & the Levites, have not separated themselves from the people of the lands, doing according to their abominations, even of the Canaanites, the Hittites, the Perizzites, the Jebusites, the Ammonites, the Moabites, the Egyptians, & the Amorites. For they have taken of their daughters for themselves, & for their sons: so that the holy seed have mingled themselves with the people of those lands: yea, the hand of the princes & rulers hath been chief in this trespass." (Ezra 9:1-2)
Read more